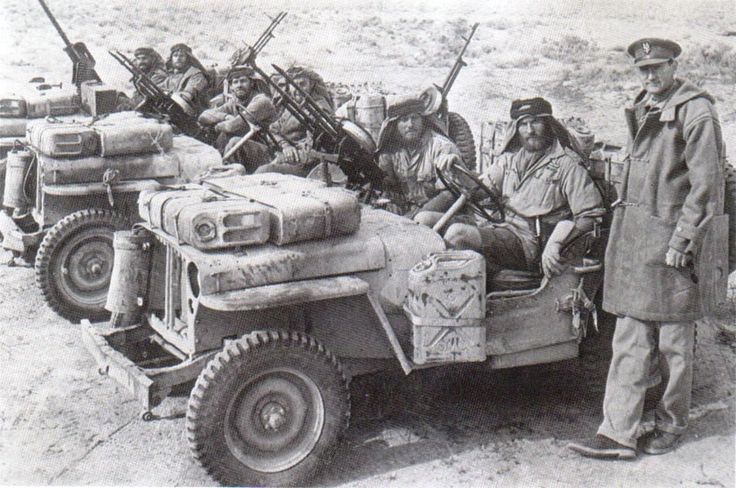 Nord Africa WW2 A close-up of a heavily-armed patrol of ‘L’ Detachment SAS in their jeeps with their twin-mounted Vickers K machine guns, just back from a three month patrol, 18 January 1943. Lieutenant Edward MacDonald sits in the wheel (foreground) with Corporal Bill Kennedy, while the driver in the second jeep is Private Malcolm Mackinnon.

The crews of the jeeps are all wearing ‘Arab-style’ headdress (kafiyeh), as copied from the Long Range Desert Group (LRDG). The officer at the wheel of the nearest jeep has a Sykes-Fairbairn commando knife on his left hip, and insignia on his shoulder and left breast, including the operational ‘SAS’ wings. The jeeps all have modified radiator/condenser systems rigged, and many jerrycans of water and petrol mounted on the bonnet, sides, and in the rear of the body. The patrol leader’s jeep mounts twin Vickers K .303 guns; the central jeep, twin and single Vickers guns at front and rear; and the furthest one, a .50cal. Browning – apparently an aircraft weapon – at the front and twin Vickers at the rear.

Note: They are using the American-built Willys Jeeps, instead of the far less-reliable British Land Rover! The famed Special Air Service (SAS) of the British Army was formed in Specially adapted vehicles were used in North Africa, including the famous 4×4 1/4-ton Truck, though heavily modified for its behind-the-lines role. The vehicle began appearing in July 1942. They were generally stripped down to save weight and, for operations in the hot climate,the grill was removed and a water condenser fitted. Weapons such as Lewis and Vickers K machine guns were mounted for use against ground or aerial targets.